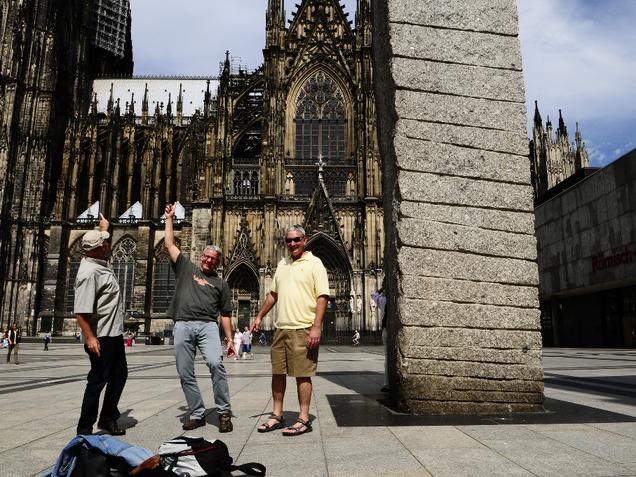 After finishing school in 1978, I had successfully completed nine years of English classes, having studied the works of Orwell and Shakespeare. I was going to start studying at university soon. Anyway, on my backpacking trips with my schoolmate Günter throughout Europe, I was unable to read restaurant menus and had problems communicating in that foreign language. Luckily we were stranded in Southern France during a Basque riot on the Spanish border in a humble railway station. With us were 600 Co-Interrail backpackers, looking forward to a cold night on the hard ground floor. Anyway, nobody slept and a big party started. That's how we met a native San Francisco teacher named Lou. The next day Lou joined us on our trip to Morrocco. During the next few years, Lou and I visited nearly all of Europe: Norway to Spain, England to Greece. Since then I have been to California five times. The comfort of travelling has improved a bit since 38 years ago! The three of us met in Marin county on our 25th aniversary with a cold glass (no ice!) of Californian Sauvignon under the Golden Gate bridge went on a Mediteranean cruise on Queen Elisabeth II just three years ago. Meanwhile our friendship has survived several marriages and even the passing away of our parents. Still today my English has great potential for further emprovement (of course in grammar and vocabulary - just thinking of my terrible spelling of "v" like in Visa Card or Vasectomy). I enjoyed telling this story! Sincerely, Elmar